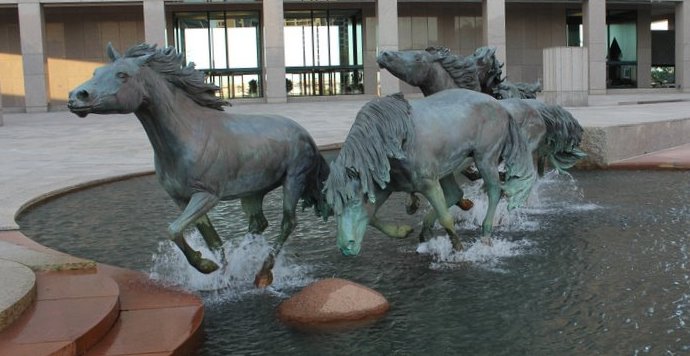 Much of the public art displayed in the Dallas-Fort Worth Metroplex has the area’s history, particularly its Western roots, as a subject. But not all of it. The two cities share a tradition of architecturally important buildings as well as modern art.

There really is no disputing it. Dallas and Fort Worth have emerged as pretty cities from the dusty north-central Texas prairie. The trees are tall and green. Each city boasts manicured plazas, grassy parks, winding trails, water features, and public art—massive, impressive public art.

There is a herd of longhorn cattle driven by three cowboys on horseback in the Dallas Pioneer Plaza. There are modern, floating red balls and a huge Henry Moore amorphous form in front of Dallas City Hall. Many buildings in downtown Dallas display historical art forms, and the flying red Pegasus has been soaring atop the Magnolia Building since 1934.

A free, self-guided Art and Fitness Trail takes visitors on a tour of the buildings and art of the downtown area. Designed to highlight history, showcase art, and emphasize the health benefits of walking, the trail begins at the Nasher Sculpture Center and concludes 3.3 miles later in front of de Musica sculpture. Across the street from the Nasher is Klyde Warren Park, an artistic, grassy pocket park and play area built over a freeway to connect the downtown and uptown areas of Dallas.

Art graces corners and courtyards, plazas, and parks throughout the area, from the Farmers Market to Fair Park. It ranges from sanctioned graffiti on building facades to scrap metal sculptures in vacant lots. Driving through the neighborhoods of Dallas is a journey of discovery.

Moving west to Irving, the nine wild Mustangs of Las Colinas have been splashing through the water at Williams Square for more than 30 years. One of the largest sculptures in the world, they are hauntingly real. It took almost a decade of planning and sculpting, but the installation was dedicated in September 1984. Today, a couple of generations have pictures of themselves as children astride the steeds.

Fort Worth also has iconic art pieces. From the Horse Fountain Water Trough on the Tarrant County Courthouse lawn to the Chisholm Trail Mural at Sundance Square, much of Fort Worth’s public art relates to the rich history of “Cowtown,” a designation that the city wears proudly. Fort Worth also has a bronze tribute to cowboys and longhorns at the Cattle Raisers Museum on West 7th Street.

Perhaps the best example of Texas-sized living art is the Fort Worth Water Gardens. Designed by architect Philip Johnson and installed beside the Fort Worth Convention Center in 1974, the urban oasis features three separate pools with a variety of water features, from bubbling brooks to synchronized fountain sprays. The setting, an engineering marvel, offers a place for quiet reflection.

Finally, no discussion of art in the Dallas-Fort Worth area would be complete without a mention of the historic treasures of the Fort Worth Stockyards, where the pens and buildings of the historic cattle exchange can be found. Fair Park in Dallas is the site of the Texas State Fair every September. Here, numerous buildings that were built for the 1936 Texas Centennial Exposition exemplify some of the best-preserved art deco art and architecture in the nation. The 277-acre site is a National Historic Landmark.

You don't have to go far in any Dallas-Fort Worth community to find hike and bike trails. Not too long ago, the Metroplex was considered one of the least bike-friendly communities in the country....
Tammy Valentine Jun 26, 2013

The Dallas-Fort Worth Metroplex is extremely dog-friendly, offering many outdoor areas where dogs are welcome. This includes a wide variety of fenced "Bark Parks" where canines can run and socialize.
Adrienne Cohen Jul 11, 2013
https://6nb29bly7g.execute-api.us-east-1.amazonaws.com/ProdStage