Wherever you live in the Dallas-Fort Worth area, chances are you will find enthusiastic football fans who are ready to support local high school teams, their favorite college players and, of course, the Dallas Cowboys.

It has long been said that Texas, particularly the Dallas-Fort Worth area, is heaven for the football fan. From the Cowboys at AT&T Stadium, right on down to high school facilities fit for the big leagues, football madness is for people of all ages. While there is a difference between the Friday night events between teenage athletes and the pro matches played under the largest dome in the world, a football fan looking for compatible neighbors has a number of choices.

Is There a Best ‘Burb for Football?

If you’d rather chat with your neighbors about football stats than discuss sports cars or the relative merits of specific grass seeds, you have lots of options. Some of your residential choices include homes in traditional neighborhoods adjacent to Southern Methodist University in Dallas and Texas Christian University in Fort Worth. The locals here often adorn their lawns and houses with team banners during football season, along with the famous blue-and-gray Cowboys logo. You can bet that “over the fence” banter here will include the latest football standings!

Moving further from the urban center will take you to smaller cities with personality and obvious pride in their high school teams. For example, there’s Cedar Hill, which is south of Dallas. This area has an impressive stadium on its high school campus and an obvious pride in its Longhorn team. Meanwhile, neighboring DeSoto has a high school team that ranked among the best 25 in the nation for the year 2013, according to MaxPreps’ Xcellent 25. There are sure to be Cowboys fans here as well.

Between the cities of Dallas and Fort Worth are Coppell and Southlake, which are two more options for incurable football fans. Both are attractive suburbs with well-manicured public spaces, numerous parks and shopping areas, good schools, and great football teams. Their locations also allow for convenient access to Cowboys games in Arlington. Their high school teams have also been included in the top 25 rankings. Texas teams consistently make that list, and several schools are from the D-FW Metroplex. That should definitely confirm this area’s love of the game.

Cowboys to Train in Frisco

Yes, it is now official. America’s Team’s new state-of-the-art training facility will be located in Frisco, north of Dallas. Jerry Jones announced plans in August 2013 for the multi-million-dollar complex, which is expected to be completed in time for the 2016 season. The school district/NFL partnership will allow high school teams to use some of the facilities, including a 12,000-seat indoor stadium, two outdoor practice stadiums, and other training facilities.

Two other northern suburbs are well-known for their football fervor: Plano, just south of Frisco, has for decades been the envy of many state high school programs, not only for its student facilities, but for its football records. Allen, which is adjacent to Plano and Frisco, built the nation’s most expensive high school football stadium 2012 and played that season to sell-out crowds in the $60 million facility.

With so many great options for football lovers, sometimes the deciding factor could be as minuscule as a coin toss. Ask any Metroplex resident if a particular neighborhood is populated by Cowboys fans, and the answer is likely to be an enthusiastic “yes.” Whether it’s heads or tails, one neighborhood or another, when you choose a home in the Dallas-Fort Worth area, you will receive a great sense of community, good value, and friendly neighbors to join you in cheering on the team. 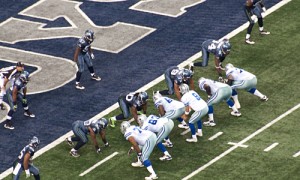 Show Your Dallas Cowboys Pride in Your Home Decor

Gray and navy blood runs through the veins of many Dallas/Fort Worth area homeowners, but how do you decorate your home to show your Dallas Cowboys spirit without going over the top? A Dallas Cowboys...
Tammy Valentine Jul 8, 2013

While Texas may be known for its famous country musicians, the state also boasts a deep rock-and-roll and blues legacy. Dallas-Fort Worth locals and visitors have an abundance of musical festivals...
Lindsey Chamberlain Sep 24, 2013
https://6nb29bly7g.execute-api.us-east-1.amazonaws.com/ProdStage