With a crack of the bat, the Philadelphia baseball season begins each spring at Citizens Bank Park. Win or lose, attending a Phillies game is a great experience to share with friends or family with plenty of fun activities in and around the ballpark.

With a crack of the bat, the Philadelphia baseball season begins each spring at Citizens Bank Park. Win or lose, leaving the house and attending a Phillies game is a great experience to share with friends or family. Aside from the actual game, plenty of fun activities take place in and around the ballpark to guarantee that everyone enjoys their day or night.

What’s New at the Ballpark

Recent tech and social media upgrades can be found throughout the park, including the “Social Media Deck” on the Budweiser Rooftop where fans will find charging stations and a video screen featuring an up to the minute social media scroll. Also, spectators can download the MLB Ballpark app for iPhone or Android and receive updated information about games as well as enter contests to win prizes. You can also order food using the app and receive a text when it’s ready for pick-up. If you’re on Instagram, snap a pic and tag @Phillies for a chance to see yourself on the big screen at the park.

Before buying tickets, check the team’s calendar for special events and giveaways. Phillies theme nights gather baseball fans with similar interests during the season to celebrate. This year’s theme nights include Bark in the Park for pet owners, Runners’ Night, and 1960s Retro Night. During the week of Independence Day, post-game fireworks shows rank among the best in the city and are well worth the price of admission. The Phillies also offer team giveaways during the season such as shirts, caps, and collectible bobble heads.

Enjoying delicious ballpark food is one of the highlights of a Phillies game. This year, a wide array of options are available, including traditional soft pretzels, roast pork sandwiches, and ice cream. “Dollar Dog” nights are another popular event at the Phillies. For the ultimate in Philly eating, try a Cheesesteak Dog, a Phillies Frank topped with steak and cheese. Wayback Burgers is now located in the ballpark, and they’re offering a special “Triple Triple Burger” with 9 patties (yes, you read that correctly), one for each inning. Choices for non-meat eaters are also superb, as Citizen’s Bank Park has been voted the top ballpark for vegetarians. A Gluten Free concession stand is also open during games.

If you’re taking your child to their first Phillies game, stop by Guest Services inside the ballpark and ask for a First Game Certificate, free to fans 14 and under. After sitting through a few innings, kids may be ready to move around and explore the ballpark well before the seventh inning stretch. Head on over to the Citizens Bank play area and test your family’s baseball knowledge in a trivia contest, or let the little ones use up their energy by “running the bases.” Kids 8 and under can also visit the Phanatic Phun Zone, a large playground area near the First Base Gate.

Lastly, at every home game, keep your eye out for the Philly Phanatic, one of the most well-loved mascots in the league. The Phanatic roams the crowd to pose for pictures, drives around the field during warm ups, and leads a dance party from the top of the dugout, to the delight of kids and adults. And, of course, don’t forget to cheer on the Phillies players as they begin another memorable Philadelphia baseball season. 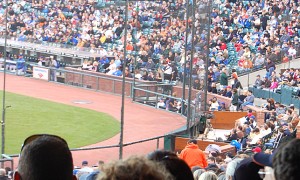 Professional ballparks are too far away for a casual evening with the kids if you live in Jacksonville, but minor league fun is right in town with the Jacksonville Suns. Find out tips on making the...
Anne Baley Nov 6, 2013

If you are an avid sports fan, Philadelphia is the place to be. The dedication of the fans come win or loss, the sprawling sports arenas, and the overall energy of the city will excite and inspire...
Louise Gaillard Sep 23, 2013
https://6nb29bly7g.execute-api.us-east-1.amazonaws.com/ProdStage