4 Reasons to Live in Roxborough

Looking for a quiet place to call home in Philadelphia? Roxborough, located in the northwestern part of the city, might be for you. The neighborhood features lots of green space, public parks and civic activities.

If the Roxborough section of Philadelphia feels a bit more like a suburb and less like a big city, that may be because it once was its own township. Although founded in the 1600s, the area became part of the city proper in the middle of the 19th century, under the Consolidation Act of 1854. Even though it’s now part of Philly, the neighborhood maintains its own identity and vibe, in part because it’s somewhat cut off from the rest of town by the Wissahickon Creek.

The area has about 39,000 residents. Here are a few reasons why you might think of moving to Roxborough and adding to that number.

You’ll find plenty of green in the area, from tree-lined streets to single-family homes that feature sizable yards. The area is also bordered by Fairmount Park and a forested area surrounding the Schuylkill Center for Environmental Education. In fact, the Schuylkill Center was part of an effort to bring back the American Chestnut tree, which was pretty much eradicated by blight and deforestation in the 20th century. Although many of the trees died, the forest around Roxborough is home to a few survivors.

If you decide to buy a home in Roxborough, you’ll end up with Fairmount Park practically in your back yard. The Wissahickon Creek section of the park is directly next to the neighborhood. It’s full of trails for hiking, horseback riding, and biking. While the main road through that section of the park is the strangely named Forbidden Drive, a number of smaller trails will take you off of the beaten path and deep into the Fairmount Park forest system, where you have the opportunity to see plenty of wildlife.

Gorgas Park isn’t as huge as Fairmount Park, but offers residents a place to spend some quality time with their neighbors. Throughout the summer, the park hosts regular events, such as concerts and movie nights. It’s also the location of a weekly farmers’ market.

Forget about Pat’s and Geno’s. Up in this part of Philly, cheesesteak rivalry is all about Dalessandro’s and Chubby’s. Like Pat’s and Geno’s in South Philly, Chubby’s and Dalessandro’s are located pretty much directly across the street from each other and are the source of constant debate over which makes the better sandwich. When you’re a Roxborough resident, you can decide for yourself and weigh in on the debate.

Although the Wissahickon Creek gives the neighborhood a somewhat secluded feel, it’s pretty easy to get in and out or to navigate around once you’re there. SEPTA operates a few buses through the section, either to and from Center City or to and from the suburbs. One bus route will take you out to the Plymouth Meeting Mall, while another will bring you over to Independence Mall. You can also hop on the Manayunk/Norristown regional rail line to get to the downtown area or out to the ‘burbs.

4. It Has a Small-Town-in-a-Big-City Feel

It might be part of Philadelphia, but the neighborhood does its best to maintain a small-town vibe. It has a civic association that works to keep the area an attractive place to live for current and incoming residents. The association has meetings every month, which are open to its members. You might be part of a big city, but in Roxborough, you can have a say about what goes on in your community.

Philadelphia Row Houses vs. Brownstones: Which is Right for You?
Harvesting Your Organic Garden Before the Cold Season Hits 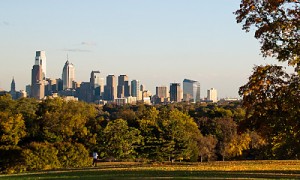 While many residents aren't aware of it, bike trails are located all over the city. If you plan to cycle the city this summer, here are the four best places to ride in Philadelphia. Be sure to follow...
John Banks Jul 15, 2013

Moving to Philadelphia? Check out some of the hottest neighborhoods in the city. Whether you want to be close to your job, arts and culture, or dining options, these five neighborhoods have a lot to...
Amy Freeman Sep 29, 2014
https://6nb29bly7g.execute-api.us-east-1.amazonaws.com/ProdStage