MADISON, N.J. (Jan. 4, 2016) – The year 2020 has long been a benchmark for when the “smart home” will finally be mainstream, but according to the results of a survey released today by Coldwell Banker Real Estate LLC, the original Silicon Valley real estate start-up founded in 1906, that time may come sooner than we thought.

The Coldwell Banker® Smart Home Marketplace Survey, which polled more than 4,000 Americans in advance of CES 2016, found that almost half (45 percent) of all Americans either own smart home technology or plan to invest in it in 2016. The survey also showed that itâ€™s not just the tech-savvy who are on board with the smart home. Of people who either have smart home technology or plan to buy it in 2016, more than one in three (36 percent) say they don’t consider themselves early adopters of technology.

The Smart Home Marketplace Survey also found that more than half of homeowners (54 percent) would purchase or install smart home products if they were selling their home and knew that doing so would make it sell faster. Of that group, 65 percent would pay $1,500 or more.

“Close to five million existing homes were sold in the United States in 2014, which represents a huge white space for smart home manufacturers,” said Sean Blankenship, chief marketing officer for Coldwell Banker Real Estate LLC. “We are aiming to be the conduit between these manufacturers and home buyers and sellers, and conducting this research was one of the first of many steps toward achieving this goal.”

Coldwell Banker Real Estate is co-sponsoring the Smart Home Marketplace at CES 2016 in Las Vegas from Jan. 6-9, 2016. This marks the first time that a real estate company is sponsoring the Marketplace, which has nearly doubled in size since 2015.

Coldwell Banker Real Estate is also hosting a CES conference, titled “Selling Smarter: Real Estate and The Smart Home,” on Wednesday, Jan. 6 from 11:30 a.m. to 12:30 p.m. Pacific. The conference will feature representatives from the Coldwell Banker brand as well as Nest, Lutron and August, who will discuss how “smart” is the next big trend in real estate and what that means for smart home technology manufacturers.

Entertainment is the entry-way for smart home technology.

Most Americans think a home can be considered “smart” if it has smart security, temperature, lighting and safety.

Smart home technology is no longer just for the young and affluent.

Buying smart home products is in one word – addicting.

The full survey results can be found here.

Search for smart homes for sale at www.coldwellbanker.com/smarthome.

This survey was conducted online within the United States between October 22-26, 2015 by Harris Poll on behalf of the Coldwell Banker brand via its Quick Query omnibus product. The survey was conducted among 4,065 adults (ages 18 and over) among whom 1,009 own at least one smart home product. For the purposes of the survey, “smart home technology/products” were defined as products or tools that aid in controlling a home’s functions such as lighting, temperature, security, safety, and entertainment, either remotely by a phone, tablet, computer or with a separate automatic system within the home itself. Figures for age, sex, race/ethnicity, education, region and household income were weighted where necessary to bring them into line with their actual proportions in the population. Propensity score weighting was used to adjust for respondents’ propensity to be online.

All sample surveys and polls, whether or not they use probability sampling, are subject to multiple sources of error which are most often not possible to quantify or estimate, including sampling error, coverage error, error associated with nonresponse, error associated with question wording and response options, and post-survey weighting and adjustments. Therefore, the words “margin of error” are avoided as they are misleading. All that can be calculated are different possible sampling errors with different probabilities for pure, unweighted, random samples with 100% response rates. These are only theoretical because no published polls come close to this ideal.

2016 Is the Year Smart Home Technology Will Be Mainstream
A CES First: 360 Degree Video of Knicks Legend Patrick Ewing’s Home 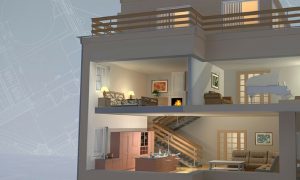