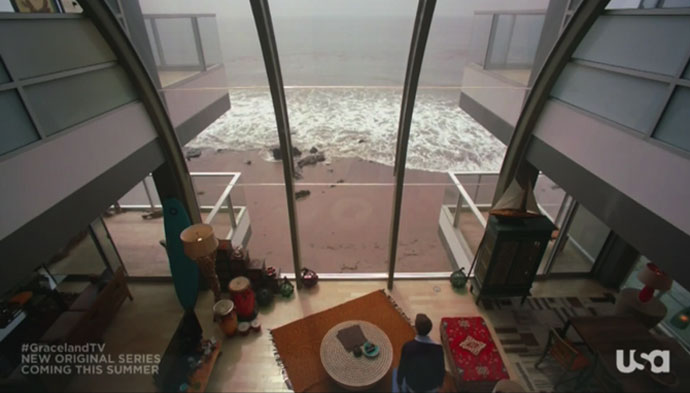 The Most Interesting Home on TV is on USA’s Graceland

Who wouldn’t want to live in a beachfront, multi-million dollar home on the sunny sands of California where you’re constantly surrounded by exceptionally good looking, youthful people? At first glance that’s what the home on USA’s new show Graceland appears to be, but the story of this home is much deeper and darker than the postcard worthy setting would have you believe.

Who wouldn’t want to live in a beachfront, multi-million dollar home on the sunny sands of California where you’re constantly surrounded by exceptionally good looking, youthful people? At first glance that’s what the home on USA’s new show Graceland appears to be, but the story of this home is much deeper and darker than the postcard worthy setting would have you believe.

Starring Daniel Sunjata (Rescue Me) and Aaron Tveit (Les Miserables), Graceland is USA network’s first series about a home. I’m serious. The home is the central character in this story for without it none of the other players would exist. Based on actual events, the story line for Graceland  centers on a home that was seized from a kingpin drug dealer in Southern California who happened to be a huge collector of Elvis Presley paraphernalia which earned it the nickname of “Graceland.” The home became a government agency experiment as they used it to house undercover agents from the FBI, DEA and customs for nearly a decade.

The USA drama drops the viewers into Graceland somewhere in the middle of its existence as you follow a new FBI agent, Mike Warren, as he gets placed inside these secretive walls among fellow government agents. The real life version of Graceland was actually in Manhattan Beach, CA (one of my favorite California towns) where the government took ownership of it from 1992 to 2001. The TV version however is actually filmed in Fort Lauderdale, Florida with some scenes from the pilot filmed in the original spot of Manhattan Beach. But what makes this home so interesting, besides the fact that the home is gorgeously situated and decorated, is the stuff that goes on inside the walls. Every resident is living a double life. Secrets about and the only place where you can find any solace is probably within the confines of your room at Graceland.

Producers of the show talked with former agents who were actual residents of the home when it was an active government location and shared stories about having to combat heroin dealers and gun smugglers during the day only to come back to the house and see that it was your turn to clean the bathroom. Dating, friends and even parties weren’t really part of life in that home. There was too much risk of secrets being revealed for that to happen.

Having watched the first few episodes I’m intrigued by the show and they do a great job of mixing in the dark parts of being an undercover agent with the lighter parts of camaraderie that go along with being a resident of Graceland. On top of all that the home itself is truly exceptional from a spacious kitchen to floor to ceiling windows facing the beach. I reached out to Graceland’s social media outlets to find out more about the actual home that is used in filming to see if it’s an actual residence or if the setting is recreated on sound stages. They did not respond with a comment, but if I uncover more details I’ll be sure to update this post.

I’m a fan of Graceland, both the home and the show. You can check it out for yourself as Graceland airs on Thursdays on USA.

Header and side image courtesy of Graceland Wikia

The 5 Most Interesting Homes on TV

Homes play a major role on television. They're often more than just a setting, but a secondary character on a show. The homes of the Brady's, the Huxtable's, the Jetson's, Bruce Wayne and even Clark...
David Marine Apr 24, 2012

I recently read a new CNBC article on Yahoo! that ranked America's Coolest Beach Homes 2010. As the author so eloquently put it, “what could be a "cooler" experience than actually owning a mansion...
David Marine Jun 17, 2010

Have you seen this guy’s ad in airline magazines?  He claims he changed his lifestyle and got the body of a 20 year old while in his 60’s.  I’m skeptical. So I look at the before and after...
Mike Fischer Jun 30, 2010
https://6nb29bly7g.execute-api.us-east-1.amazonaws.com/ProdStage