Halloween at Home: A Look Back

The writers for the Coldwell Banker Blue Matter blog share some of their favorite Halloween memories of home.

Halloween is one of our favorite occasions, not just because it gives us a reason to write about zombies and pumpkin spice lattes but it brings back a lot of memories of home. So my fellow bloggers here on Blue Matter and I sat down to hash out some of our favorite and most memorable Halloween moments from our days back home. We hope you’ll share some of yours in the comments. Enjoy.

What is the worst Halloween costume you ever wore?
Tori: The middle school years were the worst. One tragically embarrassing year I dressed up as Salt & Pepper shakers with my best friend. All evidence has been burned.

Lindsay: In middle school I decided to be a hockey player that wore a Jason mask. This was at the height of my Tom Boy years. It was pretty ugly.

Gustavo: – In 7th grade I dressed up as Razor Ramon for Halloween. I put a ton of baby oil in my hair and drew chest hair and a five o’clock shadow on my face with my mom’s makeup. I rounded out the horrible costume with a black vest that I wore without a shirt under it.

Athena: The worst costume that I donned was being a business man like my dad one year. I dressed up in a man’s tan suit, 20 times too big for me with a short-haired wig to hide my long hair while toting my dad’s briefcase, on loan. I actually thought as we headed out for trick-or-treating that it was a great costume, but then as each person dropped candy in my bag and told me what a cute little business man I was, I realized they actually thought I was just a boy dressed up as a grown man. I remember being so upset that people didn’t realize I was a girl trying to be her dad that I took the wig part off for most of that year’s celebration to make sure everyone knew I was a girl who just wanted to emulate her father.

David: I think one year I was a mime. So lame. Maybe I’m confusing it with some sort of middle school costume party thing, but in either case it was awful…and creepy. What was the best costume?
Lindsay: My grandmother handmade this mouse costume for me in preschool. (image to the right)

Athena: It’s a tie between my butterfly costume one year and my “I Dream Of Jeannie” costume the next year. The butterfly wings were so sparkly and big that I think I believed I could fly to Neverland and live with Tinkerbelle. However, the “I Dream of Jeannie” pants my mom made for me that year were so fluffy and fun along with the cool cardboard hat she made me that was wrapped with the same fabric from my pants that I totally rocked it in purple vs. Jeannie’s traditional pink.

Tori: One year I was a sleepwalker. I wore my pajamas, slippers and a little makeup to simulate bags under my eyes. It may not have been the most outlandish, but I sure was comfy!

David: My birthday is Halloween so for my 30th birthday, my wife threw me a surprise Star Wars themed party. She was Princess Leia. My two boys at the time were Obi Wan Kenobi and Yoda, and she had a Han Solo costume made for me. Evidently she got my mom to sew a replica vest of what Han Solo wore in the films.

Gustavo: I was obsessed with Ghostbusters and got the full outfit, complete with the proton pack and the ghost trap they would throw on the floor. I was Peter Venkman!

Was there a specific Halloween decoration or ritual at your house that stands out most in your mind?
Tori: Every year we would host a Halloween party at our home and my parents would go just a little too far. They’d haunt up the basement and line the driveway with tombstones for all of our guests. My mom would dress in tattered clothes, a witch hat and gruesome makeup and she’d answer the door “Hello, my pretty!” in a witch cackle of a voice. For years my friends were a little frightened of the red-brick house on the hill.

Gustavo: Every weekend before Halloween we would carve pumpkins and watch scary movies that I probably shouldn’t have watched. I thought I would never recover from watching the Exorcist.

David: The cake shaped like a pumpkin. I don’t think my mom made it every year, but more than a few years my birthday cake was shaped like a pumpkin with orange frosting and a jack-o-lantern face on it. There’s a photo with me and that cakes when I was 4 or 5 years old that is cemented in my mind.

Lindsay: Pumpkin carving was something I always looked forward to. My mom would spread newspapers over the table and my parents and I would go to town. Now my husband joins in with us!

Athena: My sister and I would be joined by all my cousins at my grandmother’s house to help her make the first of the year’s pumpkin pies. My grandmother’s pumpkin pies were legendary in Sarasota where I grew up. And all the kids, because we were such good helpers, always got the first tastings of the year. Thankfully before she passed away, she finally wrote down her recipe so generations could continue to enjoy Grandma Ruth’s delicious pies.

What are the new Halloween traditions you’re creating at your home?
Gustavo: My girlfriend and I just adopted a dog in April so we’re looking forward to dressing our pup up for Halloween each year. This year she’ll be a Nathan’s hot dog.

Tori: It’s not Halloween until Hocus Pocus is watched.

David: Hocus Pocus, Tori? Really? Although I guess pretty much any Bette Midler movie is frightening to me. But I digress. My wife is a fantastic baker so there are many a pumpkin flavored treat that comes out around Halloween from pumpkin muffins to pumpkin scones to pumpkin cheesecake.

Athena: My husband and I vowed this year to stop turning off the lights in our house while we hide in some back room because we forgot to pick up treats at the grocery store. We vow to start a new tradition of being good to the neighborhood kiddies.

Lindsay: We’ve decided to go big and give out movie size Halloween candy because we want to be the cool house on the block!

Best & worst thing you’ve received while trick or treating?
Athena: Having a younger sister is a blessing (sometimes, smiley face inserted here), and Halloween is one of those good times. She loved hard sour candy, and I loved chewy stuff. So at the end of the night the treats that I didn’t like, she loved, and the treats she didn’t like, I loved. So the trading began and all was always well by the time we had to go to bed that night. Thankfully Jimmy Kimmel wasn’t around back then to encourage our parents to pretend all our treats were eaten the next morning!

Gustavo: Best are Fortune Cookies (my fave) from the local Chinese restaurant. Worst: Box of raisins

Lindsay: Best are homemade caramel apples from our neighbor. The worst: pennies

Tori: The worst thing was definitely a toothbrush. That’s just mean. The best thing was always from our house. We lived in a cul-de-sac at the top of a hill, so it was a hike to get up to. My mom always felt you should be rewarded if you made it, so she gave out giant candy bars.

David: Pencils are the worst. Really? Show some effort people. My 5 year-old has a habit of looking at what you are giving out and if he doesn’t think it’s good, he’ll just walk away. He’s got high standards. Best trick or treating was at my Aunt Fran’s house. She would give you a sandwich bag filled with candy and there’d be a $5 bill in there too. #Jackpot.

You’ve heard some our stories, now we want to hear yours. Share your answers to our questions in the comments! 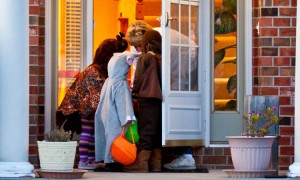 Our list of spooky, silly and downright adorable Halloween costumes that you can make at home!
Victoria Keichinger Oct 10, 2014 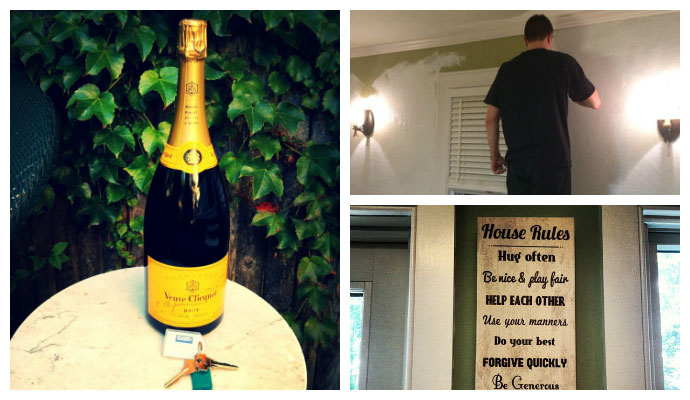 First time home buyers are one of the most inquisitive group of people you will ever come across. They are a sponge for real estate knowledge as they embark on what will most likely be the largest...
David Marine Nov 13, 2013

I think iit's safe to say every homeowner remembers their first Halloween at their home.Having Trick or Treaters is like a home ownership rite of passage. After having a self debate in the candy...
Lindsay Listanski Oct 5, 2012
https://6nb29bly7g.execute-api.us-east-1.amazonaws.com/ProdStage