The Perfect Home for Jack Bauer

We set out to build the perfect home for the man who knows what it’s like to have a really long day.

Jack is back. Kieffer Sutherland reprises his role as the ultimate hero, Jack Bauer, in Fox’s Emmy-winning show 24. The serial drama, which for 8 seasons has taken you through the worst day imaginable, returns tonight to begin a mini-series event with London as the new setting for chaos.

While we’ve lived through these days with Jack, Chloe and the merry band of misfits at CTU, it begs the question what kind of home do these characters live in when they’re not saving the world? Jack Bauer’s home was featured in the initial episode of the first season of the show (see it here). Three minutes into the premiere we get a look inside the Bauer home which sets the stage not just for the action to come, but the family dynamic that will carry these characters through multiple seasons…except for Teri…I guess I should have warned you of a spoiler alert. Oh well.

Here at Coldwell Banker Real Estate, we want to help Jack Bauer find the perfect place to call home. Seeing as Jack isn’t real we took some liberties and pulled in different rooms and features from Coldwell Banker listings across the globe to create what we think is the perfect home for Jack Bauer. Jack doesn’t care for Victorian architecture. He can’t be bothered with Colonial layouts. Jack is a man’s man who’s used to living a bit rugged. He wants a home that’s been built with human hands that can withstand coyote attacks. This log cabin in Tabernash, CO has Jack Bauer’s name written all over it.

Must Have Feature: Helipad Whether it’s POTUS, Chloe or even Kim snagged in a bear trap, Jack needs the ability to jump into action quickly. A home with a helipad allows him to do just that like this amazing place in Miami Beach, FL. Jack likes games. Not games played by evil villains to plot his country’s demise. He likes board games. Back in season 1, the first thing we see Jack do is actually play his daughter, Kim, in a game of chess. Clearly Kim is going to lose until mom tells her it’s bedtime. You really think you can outsmart Bauer in chess? Or even worse, call his bluff in poker? This game room located in a listing in Newport Beach, CA suits Jack perfectly. You can’t work as hard as Jack does for 24 straight hours without sleep unless you’re are fit. He doesn’t have time to go to the gym so he needs an exercise room at home to make sure he maintains that physical edge over enemies of the state. A room like this one inside a home for sale in Salt Lake City, UT just might be the right fit. Even Jack Bauer needs to relax. Running around all day, dodging bullets, beating up terrorists and not getting a break to even go to the bathroom is no easy task. Jack needs to kick back with a soak in a tub or a dip in the pool like this one from a listing in Princeville, HI.

Bonus: Room for the Grandkids Jack Bauer is a grandpa. Let that settle in for a moment. Doesn’t feel right, but it’s true. So when Kim comes to visit with the grandkids he’s going to need a spot to put up. That’s where this awesome kids room comes in from a listing in Miami Beach, FL which features an indoor kids playland set!

Slideshow: The Perfect Homes for Golf

The single greatest golf tournament known to man begins today. The Masters tees off for what's sure to be another legendary tournament with Tiger Woods back at the top of his game, Bubba Watson back...
David Marine Apr 11, 2013

The final Emmy nominated drama series in our outstanding home list is Showtime's critically acclaimed Homeland. The show is set for the most part in Maryland and Virigina, but most of the filming is...
David Marine Jul 27, 2012 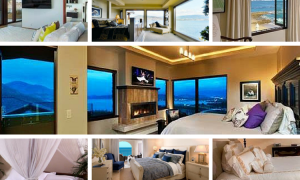 14 Bedrooms Where Waking Up Is Better Than Your...

Prepare to have a serious case of wanderlust.
Lindsay Listanski Jun 25, 2015
https://6nb29bly7g.execute-api.us-east-1.amazonaws.com/ProdStage