Soho NY and Greenwich Village are two bustling, lively downtown neighborhoods in New York City. Both neighborhoods have their own distinct traits and attributes that distinguish them from one another and contribute to their uniqueness.

Soho NY and Greenwich Village are two bustling, lively downtown neighborhoods in New York City. Both have tons of great shopping, wonderful restaurants, and easy access to transportation, all of which draws tourists and locals alike. Both neighborhoods have their own distinct traits and attributes that distinguish them from one another and contribute to their uniqueness. Here are some things to know about both Soho and Greenwich Village.

The neighborhood of Soho NY runs from Houston to Canal north to south, and Crosby to West Broadway east to west. The area is characterized by the cast-iron buildings that lend beauty and historical context to the area. In contrast, the neighborhood of Greenwich Village goes from 14th street to Houston north to south, and Broadway to the Hudson River east to west. Greenwich Village is located northwest of Soho. Historically, both Greenwich Village and Soho have drawn populations of artists. Soho’s large loft spaces, originally used for industrial purposes, attracted artists who appreciated the large, open spaces and natural light. Greenwich Village has been known as an important part of the bohemian movement and served as a home to many artists, alternative thinkers, and members of beatnik culture in the 1950s.

One popular and well-known fixture of Greenwich Village is beautiful Washington Square Park. NYU is also located nearby, making the area a mainstay for college students and businesses catering to them. Soho NY is currently well-known as a shopping district. The area offers shops on all ends of the spectrum, from J. Crew to Chanel and everywhere in between. Excellent eateries abound as well, like Maison Ladurée, Dominique Ansel Bakery, and Balthazar. Greenwich Village also boasts wonderful restaurants, like Artichoke Basille, Babbo, and Minetta Tavern.

Soho is served by many subway lines, such as the 1, the A,C,E, the N,Q,R, the B,D,F,M, and the 6. Greenwich Village is served by the 1,2,3, the A,B,C,D,E,F, and M, and the R and the L. Both are easy to get to from many parts of the city. However, Soho is much more easily accessed from the Upper East Side than Greenwich Village is, since the 6 goes straight from the Upper East Side to Spring Street. The PATH train stops in Greenwich Village (at Christopher Street), making that neighborhood very easy to access from New Jersey.

Overall, both Soho and Greenwich Village carry a lot of appeal. Soho attracts many tourists because of its large selection of shopping, and Greenwich Village remains more populated by locals and students from the college. However, both neighborhoods have their own advantages and distinct charm, and both are worth visiting or living in!

Moving In: 5 Tips for Moving Day in NYC
The Best Activities to Enjoy Spring in New York City 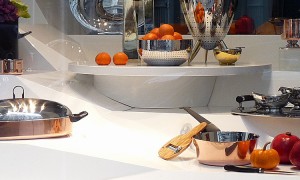 3 Great Decor Stores in SoHo to Check Out

Next time you find yourself in the neighborhood, be sure to check out these stores in SoHo. Whether you pick up a few items for your home or just gather exciting new home decor inspiration, you won't...
Jacqueline Clair Nov 13, 2014
https://6nb29bly7g.execute-api.us-east-1.amazonaws.com/ProdStage