Tips for Tasteful American Decor in Your Home

Adding American decor to your home’s interior is a great idea for celebrating our country’s independence on the Fourth of July and beyond. Explore these tips for tastefully representing America’s independence in your Philadelphia home.

Proud Philly residents know that the Declaration of Independence was finally signed in Philadelphia in August, 1776, a month after independence from Great Britain was declared on July 2. (Congress approved the Declaration’s final text on July 4, giving us our holiday.) With that heritage, it’s little wonder the city’s locals celebrate with American decor in their homes.

If you also enjoy having an American theme running through your home, keeping things tasteful is important. Painting a huge US flag on your living room wall isn’t very subtle or classy, but there are ways to capture the essence of the Fourth of July and America’s independence in your home decor without pushing the boundaries of good taste. Show your friends you’re a proud patriot with these creative interior decorating tips.

Use the Couch as Your Canvas

If you have a white or light-colored sofa, you have a perfect canvas for paying homage to America’s independence. Purchase some solid red and blue throw pillows to put on the couch for a subtle and understated patriotic touch. You can also opt for striped cushions to mimic the stripes of the American flag.

The US flag shows 50 stars representing the 50 states, so one idea for American decor is to create a starred light scene in your living room to tastefully and creatively reflect the stars on the flag. Retailers sell specialized light fixtures that illuminate patterns and shapes—choose one that projects the image of stars into a corner of the room when you turn down the main lights. The great thing about this idea is that you can turn the starry light scene on and off whenever you’d like, whether it’s on July 4 as the fireworks brighten the sky outside, or each night throughout the month of July.

Another proud Philadelphia icon is the Liberty Bell, which is thought to have been rung on July 8, 1776, to celebrate the reading of the Declaration of Independence. The historic bell is on display at Market Street between 5th and 6th Streets in Old City, Philadelphia. You can use a replica or two of the Liberty Bell as a decorative element in your kitchen or living room, or even as a centerpiece on your dining room table for your July 4 dinner.

If you want to fly a US flag as a more outright representation of your love of our country, keep it subtle and tasteful by letting it stand proudly in an uncluttered area of your house where it can be seen but doesn’t dominate the room. Instead of hanging a flag on the wall, try placing a rug with a design reminiscent of the flag in your den or living room.

For tasteful American decor, use elements of traditional themes associated with America’s independence such as colors (red, white, and blue) and iconic symbols. While subtlety is key, don’t be afraid to be creative and think outside of the box. 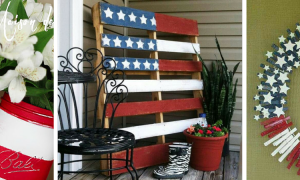 In honor of Flag Day this Sunday, we're sharing some unique ideas to add stars and stripes to your home decor.
Victoria Keichinger Jun 12, 2015

It's Fourth of July Week and I always enjoy pulling out sparklers and celebrating the holiday with my friends and family. As I enjoyed the festivities of the three-day weekend, I reflected on the...
Bluematter Jun 29, 2011 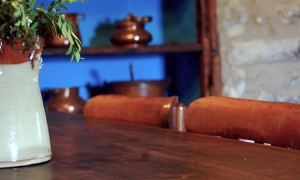 Philadelphia is an exciting place to be — but everyone needs a refuge from the hubbub sometimes. How can you channel the spirit of the City of Brotherly love with your home decor? Check out these...
Louise Gaillard Jun 9, 2014
https://6nb29bly7g.execute-api.us-east-1.amazonaws.com/ProdStage