We breakdown the 2015 NCAA Tournament field by looking at which schools come from the most affordable towns.

No, not the Chicago kind. The ones from Buffalo. Never heard of them? Not surprising if you’re not from Northern New York but the Bulls of Buffalo are not only dancing in the tournament, but when you map out the 2015 version of the Coldwell Banker Bracket of Affordability they come out as champion.

In this year’s NCAA Tournament field the most expensive market is owned by the University of California – Irvine with the price of a 4 bedroom home in Irvine, CA coming in at just over $1 million. The most affordable is of course in Buffalo with the price of that average home being listed at $97,288.

The theme in this year’s Bracket of Affordability is bet on the mid-major conferences having more affordable homes than the major conferences. In our final four you have Buffalo, Dayton, Ole Miss and Iowa State.

And as has been the case every year we’ve done the Bracket of Affordability, we continue to pick a 16 seed to beat a 1 seed. Actually, we have three 16 seeds beating 1 seeds with Coastal Carolina, Lafayette and North Florida all making it out of the first round.

Now do we think our bracket is one you should model yours after? Probably not…although I do like that Dayton squad who made a deep run last year to force a few upsets again this year. And I wouldn’t look past those Bulls from Buffalo either…

Take a look at the 2015 Coldwell Banker of Affordability by clicking the image below and see how these college markets stack up when it comes to affordable home prices. Then find an affordable home in your favorite school’s market by visiting coldwellbanker.com. 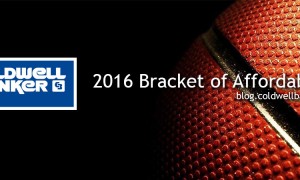 The NCAA Tournament field is set, but which team can boast the most affordable college town?
David Marine Mar 14, 2016
https://6nb29bly7g.execute-api.us-east-1.amazonaws.com/ProdStage