3 of the Hippest Neighborhoods in NYC

Trying to find out about the hippest neighborhoods in NYC? You’re certainly not alone. For many New Yorkers, trendspotting is a top-priority pastime (even if it results in the occasional bout of hipster fatigue). It’s always good to keep up with the city’s latest hotspots — and for those in search of the hippest, coolest neighborhoods in NYC, here are a few places worth knowing.

If SoHo was a person, it’d be the cool American girl with dual citizenship who wears the best clothes, sports enviable gear, and gets in everywhere. With roughly 13,000 residents, the celeb-filled nabe is a relatively small A-lister playground chock-full of deep-pocketed loft-dwellers, luxurious shops, hip restaurants, French bakeries, gourmet food shops, and food trucks, all coexisting underneath a layer of cool that survives in spite of the hordes of tourists that descend upon the neighborhood every day. After all, the most high-flying SoHo residents know that once they’re safely esconced in their multimillion-dollar pads, all the hubbub from the streets below will fade into the background. There are scant grocery stores here, but that’s OK, because you’ll soon realize that Fresh Direct and Seamless are, like, the coolest delivery services ever.

When it comes to the hippest neighborhoods in NYC, few are cooler than the West Village. How cool? Your apartment could be so tiny that it has a kitchenette in a closet and a bathroom that can only fit one extremely skinny person at a time, and your pad would still inspire envy in just about anyone who could pick NY1 anchor Pat Kiernan out of a lineup. Even the dogs are cool here, with their very own hard-to-get-into clubs.

This is the neighborhood of nonstop action, its bars and clubs packed with scenesters till the crack of dawn. In addition to the lively nightlife, tons of boutiques like the men’s fashion retailer Odin and unisex shop Rag & Bone cloak residents and tourists alike in pricey casual gear, while restaurants like country-farmhouse-style Mas and grocery stores like Gristedes and Gourmet Garage keep everyone decadently fed and happy.

Years ago, if you’d told someone that you lived in the Flatiron District, they’d have said something like, “Whaaaaat? You live in that skinny building?” For a long time, the famous triangular Flatiron Building (six feet wide at its northernmost point!) was the area’s only well-known attraction, as there was nothing in the area except giant retailers and businesses run out of old lofts. But things have changed.

Today, saying that you live in the Flatiron District earns you cool points among New Yorkers who understand these things. Awesomely addictive design stores like ABC Carpet & Home (seriously; you won’t leave) will help you make your home as chic as you are, while the area’s innumerable clubs, speakeasies, and lounges will ensure that dubsteppers, NaeNaers, and those who just coolly bob their heads to the music will never miss a beat. Those old lofts where businesses once churned out their wares have been turned into some of the most chic — and pricey — residential real estate in the city. 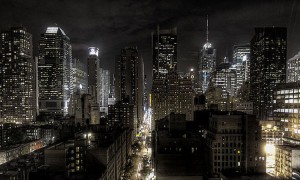 NYC nightlife is legendary, with people all over the world dreaming of one day being able to experience just a taste of it. Oftentimes, people just want to know where the action is, and this article...
Sakai Blue Jun 2, 2014