Buying a Home in Queen Village

Named after Queen Christina of Sweden, Queen Village is an old neighborhood in south Philadelphia. With its small, historic homes and convenient location, the area appeals to many. Learn more about the history of the area before deciding to buy there.

Located by the waterfront in South Philadelphia, Queen Village is the oldest neighborhood in the city. It was settled by the Swedish, before William Penn arrived and set up his plan for Philadelphia. Originally called Southwark, the area was annexed by Philly in the middle of the 1800s. While many of the homes in the area are modest in size, consisting of smaller trinities or workingman’s rowhouses, over the past few years, the value of homes in the area has increased significantly. Average sale price was $311,978 in 2011, according to the Center City District, compared to $211,356 in 2003.

Owning a Piece of History

If you’re thinking of buying a home in Queen Village, you might end up purchasing a building on the Register of Historic Places. Nearly 800 existing homes in the area are on the register, according to the Queen Village Neighbors Association (QVNA). When you purchase a historic home in the city, you’re limited in terms of what you can do to the exterior of the home. You’ll need to get the permission of the historical commission before you obtain a permit or start any work on the home.

Compared to other parts of the city, the housing style in the neighborhood is distinct. According to the QVNA, homes in Queen Village were originally made of wood, not brick. Not many of the wooden homes remain, though. The shape and size of homes is also distinct. The trinity house, which features one room floors and hatched roofs, are common in the area. Double trinities allow homeowners twice the space of the traditional trinity, as each floor has two rooms.

While many of the homes in this neighborhood are historical, the area is full of modern conveniences. Shopping opportunities abound, such as the fabric stores, salons and vintage shops along Fourth Street, dubbed Fabric Row. Dining options include French at places such as Crêperie Beau Monde or Bistrot La Minette, pizza at Pizzeria Stella, and sandwiches and lunch fare at the Famous 4th Street Delicatessen. You can find groceries at Essene Market or pick up fresh produce and other locally produced foods at the weekly farmers market at Headhouse Square. Grocery stores, banks, and other everyday necessities are within easy walking distance of the neighborhood, too.

A great number of Queen Village properties (roughly 400), were demolished in the 1970s to make way for I-95, according to the QVNA. While razing those buildings was bad news for the history of the area, it was good news for today’s commuters are who thinking of moving to the neighborhood. Access to the highway is just a few blocks from the heart of the neighborhood, which can be ideal if your work takes you out of the city on a regular basis or if you enjoy being able to quickly leave town to head down to the shore on weekends.

The area is also convenient if you rely on public transportation. A few bus lines, such as the 57, run north and south through the neighborhood. The 40 and 64 buses run east and west through the area. If you prefer to take the subway, the Broad Street Line is eight blocks from the western edge of the neighborhood, while the Market-Frankford Line is about a mile north of the area.

With its unique building styles and so many amenities within walking distance, Queen Village is a historic neighborhood full of modern conveniences.

Stop the Leak: Roofing Installation Tips for Philly Homeowners
The Benefits of a Home Inspection in Philadelphia 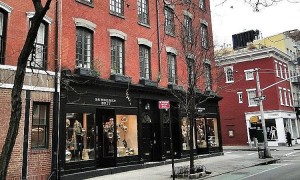 4 Reasons to Rent in Greenwich Village

Greenwich Village is one of the best neighborhoods in the city for renters. People who live there already know that it's fabulous, so this article is for people who are unfamiliar with the area and...
Sakai Blue May 16, 2014