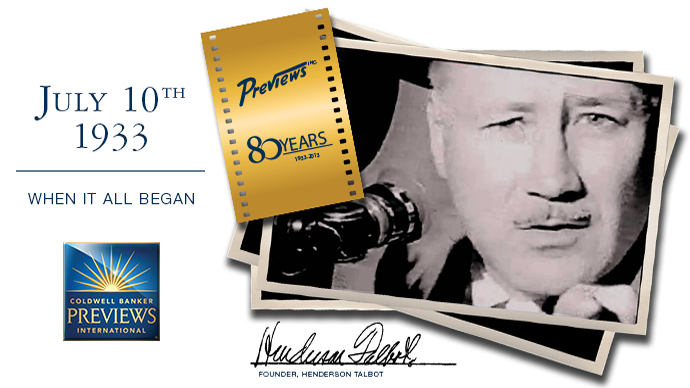 In July of 1933, Franklin Delano Roosevelt had recently completed his first 100 days in office, King Kong had recently been released in theaters and Corn Flakes cost just 20 cents! A great deal has changed since then, but today we recognize and celebrate the 80th anniversary of Previews®., which was founded on this very date in 1933.

In July of 1933, Franklin Delano Roosevelt had recently completed his first 100 days in office, King Kong had recently been released in theaters and Corn Flakes cost just 20 cents! A great deal has changed since then, but today we recognize and celebrate the 80th anniversary of Previews®, which was founded on this very date in 1933.

It was the height of the Great Depression and stately million dollar properties were languishing on the market and sales professionals had limited funds and resources to market them properly. Enter entrepreneur Henderson Talbot, who leaned on his work experience with Time and Forbes to create a marketing program for prominent properties; showcasing them in all their grandeur in an elaborate magazine named Previews.

With the film industry picking up steam with the introduction of sound and music, Henderson created five-minute film tours of various estates for potential buyers. Beyond these Hollywood studio quality short films, Talbot’s innovation extended to the actual home selling process, as he placed the full costs of marketing listings on the seller.

In 1980, Coldwell Banker Real Estate purchased Previews, Inc. and saw it as an opportunity to take the name long synonymous with luxury real estate to the next level by establishing criteria that live on to this day:

80 years after the founding of the preeminent name in luxury real estate, the core values of Henderson Talbot remain the same but we also push to extend his original vision to new platforms relevant for the 21st century with the showcasing of listings on our award-winning website www.coldwellbankerpreviews.com. We also publish tens of thousands of the world’s most luxurious homes on our mobile applications and video portal Coldwell Banker On Location. Add in our continued partnership with top publications like The Wall Street Journal, Unique Homes and Robb Report Exceptional Properties; and we’re confident Previews will be marketing fine homes well into the future.

Whether it’s selling the home of pop-culture icons like John Lennon or the current highest priced home in the United States – Casa Casuarina* – the $125 million former home of the late Gianni Versace; Coldwell Banker Previews has been a dominant player in global luxury real estate for nearly a century. And with a record in 2012 of 16,400 transaction sides of homes priced at $1 million+, this 80 year old is just getting started.

With a history like this, it is easy to see why we think turning 80 is a big deal. Because for 80 years we’ve been helping sales associates’ market exceptional estates to some of the world’s most notable individuals of their time. It is who we are and we think you’ll agree that our legacy is the difference!

*Represented by The Jills®, top-ranking team in the Coldwell Banker network as reported by Ultimate Homes list of Most Expensive Homes in U.S., Unique Homes magazine June 2013.

I have been with Coldwell Banker for a long time. In fact, I have “bled blue” for all but one year of my 35-year real estate career. I just computed that I’ve been with our great brand for...
Bluematter Aug 27, 2010

In this latest version of the Coldwell Banker Previews eZine, we sat down with Jane Seymour to get her take on “the fine art of living” and get some insight into her new furniture collection.
David Marine Jul 12, 2011
https://6nb29bly7g.execute-api.us-east-1.amazonaws.com/ProdStage