Don’t we all love an underdog? From Rocky to the 1980 U.S. Olympic Hockey Team to Butler in recent editions of March Madness. But in real estate, allow this to be the third installment of our love affair with the “comeback kid” – Grand Rapids, Michigan. Don’t we all love an underdog?  From Rocky to the 1980 U.S. Olympic Hockey Team to Butler in recent editions of March Madness. But in real estate, allow this to be the third installment of our love affair with the “comeback kid” –  Grand Rapids, Michigan.

You may remember back to January 2011 when Newsweek declared that Grand Rapids a “dying” city.  Ouch.  That was harsh.  And remember how we rallied around the great YouTube video that showed that the town would not take such a debunking lightly?   From that point on, I was hooked on Grand Rapids!

So imagine my delight to see that my favorite Michigan city saw its median home price according to the National Association of Realtors increase by 19% in the first quarter of 2012 compared to the same time a year ago.  Grand Rapids was second in the nation behind Cape Coral/Fort Meyers in Florida that had a 28.1% increase!

To be fair, the Grand Rapids median price is still slightly under $100K but I call that a bargain.  In Grand Rapids, you get the Gerald R. Ford, Presidential Museum, minor league hockey and baseball, art, culture and less than an hour to the Lake Michigan beaches!

And we can’t forget one of the best YouTube video of all time!

Remember back in June when Newsweek declared that Grand Rapids was a dying city? Remember when they fought back with an incredible video that showcased the vibrancy of the city and its people? Well...
David Marine Aug 15, 2011 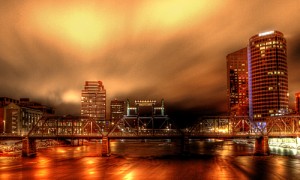 Beer City USA: A Guide to the Grand Rapids Craft...

The craft beer industry in Grand Rapids has been growing leaps and bounds, and locals are proud of the great beer, festicals, and homebrewing resources this city has to offer. Why is Grand Rapids...
Carrie Silverthorn Sep 15, 2014

Who doesn't love a great comeback? Whether it's Rocky, Rudy, or Friday Night Lights, I'm a sucker for the underdog. A great story that has gotten attention this week is the fighting spirit of the...
David Marine Jun 3, 2011
https://6nb29bly7g.execute-api.us-east-1.amazonaws.com/ProdStage