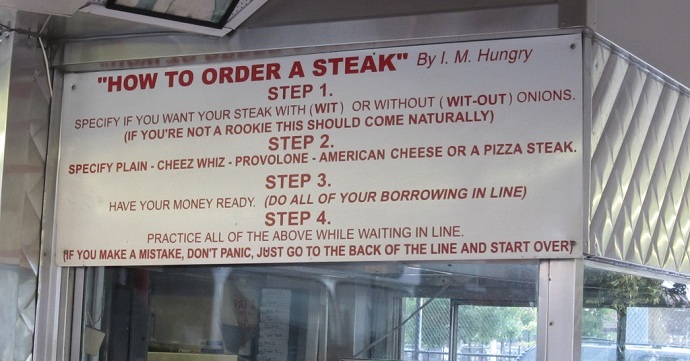 Traditionally, South Philadelphia has been the place to go for the best Philly cheesesteaks, but over the years, many great steak shops have popped up in adjacent Philadelphia neighborhoods, and even the suburbs.

Philadelphians want to be healthy. Really, they do. Each year, the city hosts numerous running events, including the Philly Marathon, the Rock-n-Roll Half Marathon, and the Broad Street Run. Yet the allure of a steak sandwich, smothered in melted cheese and served on a crusty Italian roll, can quickly sink one’s good intentions. If you ask residents where to go to find the best Philly cheesesteak, chances are they will quickly rattle off a list of places where they have indulged.

Traditionally, South Philadelphia has been the place to go for the best Philly cheesesteaks, but over the years, many great steak shops have popped up in adjacent Philadelphia neighborhoods, and even the suburbs. No matter where you live in the Philadelphia area, a good cheesesteak is easy to find. Stick around the city long enough, and you can sample many local offerings and rate your own favorites.

Passyunk Avenue in South Philly is the location of the famous Pat’s King of Steaks versus Geno’s Steaks rivalry. The two longstanding cheesesteak shops are located in sight of each other and both attract 24-hour, seven-day-a-week business from college students, Philly sports fans, and tourists in search of a midnight snack. Neither place has indoor seating, so plan to eat outside and dress accordingly. Ordering instructions are posted at Pat’s to help out-of-towners learn the local cheesesteak lingo.

Tony Luke’s is another famous steak shop originating in South Philly. Besides the original restaurant on Oregon Avenue, Tony Luke’s cheesesteaks are served at Citizens Bank Park and Lincoln Financial Field, so if you’re in town for a sporting event and looking to try a Philly cheesesteak, stop by one of these two locations.

Iron Chef Jose Garces offers his own version of the Philadelphia cheesesteak at several of his restaurants. The cheesesteak at Garces Trading Company features shaved ribeye, pickled pepper aioli, taleggio fondue, and caramelized onions. Philadelphia restaurateur Stephen Starr’s Barclay Prime offers a $100 cheesesteak made with wagyu ribeye, foie gras, and truffled cheese whiz on a fresh-baked sesame roll, accompanied by a 1/2 bottle of champagne. The Fountain Restaurant, located in the Four Seasons, also offers a Philly cheesesteak on the lunch menu.

Northeast Philadelphia – Home of the Prince

The Northeast Philadelphia section, home to over 400,000 residents, is also a popular area where you will find authentic Philly food. With two locations in Northeast Philadelphia, Steve’s Prince of Steaks is often mentioned as a contender for the best Philly cheesesteak. The steak at Steve’s differs slightly from a traditional cheesesteak because the meat is sliced thicker than the traditional thin, chopped version most people associate with a Philly steak.

The Suburbs – Many Contenders

The opening of multiple Tony Luke’s locations in the Philadelphia suburbs and South Jersey, including one in the King of Prussia mall, means you no longer need to drive all the way to city to enjoy one of the best Philly cheesesteaks. Pudge’s Steaks & Hoagies, which has operated in Blue Bell, Montgomery County, for over 30 years, has won best-of-Philly and best-of-county awards and is highly regarded.

Lastly, after you have completed your Philadelphia cheesesteak tour, don’t forget to engage in your favorite form of exercise to burn off some calories. Ride a bike around the loop in Valley Forge Park, try Dragon boat racing on the Schuylkill River, or simply run up and down the art museum steps, Rocky-style.

Many people want a good view of the city when settling on a new place to live. Philadelphia has a number of areas that offer this simple pleasure -- this article discusses three places where you can...
Louise Gaillard Jul 29, 2013
https://6nb29bly7g.execute-api.us-east-1.amazonaws.com/ProdStage