The NCAA Tournament field is set, but which team can boast the most affordable college town?

Selection Sunday was  yesterday and that can only mean one thing – it’s time for the 2016 Coldwell Banker Bracket of Affordability! Sure you watched that ridiculously long selection show yesterday and then realized 20 minutes into it that Twitter had already released the entire bracket. But you know deep down inside you were waiting to see which college towns would make the Final Four of affordability, and that’s exactly why you’re reading this right now.

This year’s tournament field turned out to have a higher average sales price across the board than in previous years, which is a good sign that the real estate market is looking up across the country. The most expensive college town in this year’s NCAA Tournament field of 68 teams is Berkley, CA which of course is home to the Cal Golden Bears who look pretty good this year and could make some noise in the tourney. Not far behind them was an East Coast team from none other than South Orange, NJ, home to Seton Hall University, with a median home price of $720,000.

The most affordable college market is Pittsburgh, PA as the Pitt Panthers take home the affordability crown in 2016 with a median home price of $107,900. The second most affordable college town didn’t even make the Final Four as they happened to be in the same region as Pitt. The consolation prize goes to beautiful Fort Myers, FL – home to Florida Gulf Coast University – with a median home price of $120,000.

Check out the full 2016 Coldwell Banker Bracket of Affordability below and best of luck in filling our your brackets in what has been a crazy college basketball season. To find a home for sale in your favorite college town, please visit coldwellbanker.com. A St. Patrick's Day Dinner Alternative If Corned Beef Isn't Your Thing
Best Practices for Paying Off Your Mortgage 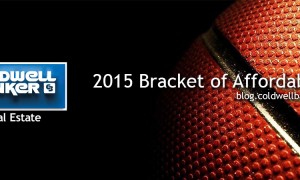 We breakdown the 2015 NCAA Tournament field by looking at which schools come from the most affordable towns.
David Marine Mar 15, 2015
https://6nb29bly7g.execute-api.us-east-1.amazonaws.com/ProdStage