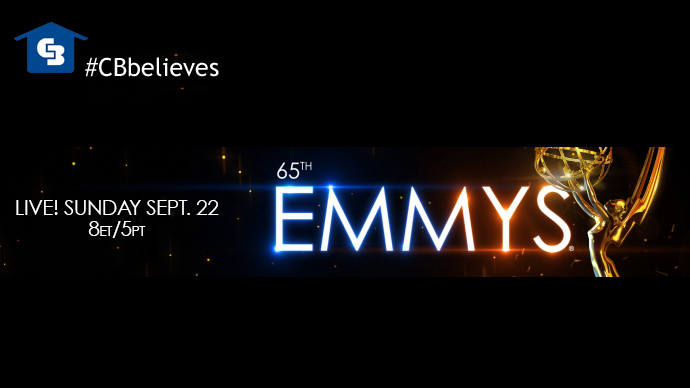 With a home buying and selling market that continued to show measurable improvement, we kicked off 2013 by “going Hollywood” and airing our television ads during the Golden Globes, Academy Awards and Grammys. With over 88 million combined viewers and a record breaking amount of commentary on social media, we would be hard pressed to reach a larger and more engaged mass audience with our message.

While we’ve continued to air our “We Believe” :30 second spot on networks like ESPN and NBC, the final piece of our award show “Blue Carpet” Strategy takes place when the 65th Primetime Emmy Awards air on Sunday, September 22nd.

At Coldwell Banker Real Estate we love movies, but there is something special about the connection we have to the characters and television shows we invite into our homes each week. There also happens to be a wealth of beautiful, unique, and sometimes even bizarre homes with interesting stories featured on these TV programs as well.

To prepare for our big night on 9/22, here are some of the most interesting homes and stories from 2013 Emmy nominated television programs:

The unexpected belle of the ball at the Emmy’s this year is the surprise hit, House of Cards, from everyone’s favorite digital movie source, Netflix. House of Cards is the first Internet-only TV show to be nominated for an Emmy and they were nominated for an astounding 9 Emmy’s including Best Actor for Kevin Spacey, Best Actress for Robin Wright and Best Drama. (Read More)

The Bates Motel Home: The Scariest Movie Home of all Time?

Few homes in movie history are as utterly scary and nightmare inducing as Norman Bates’ home in Alfred Hitchock’s ‘Pyscho’. Perched ominously on a hill up from their “Bates Motel”, the old wooden and monstrous (in more ways than one) home set the bar for frightening audiences with scenes so shocking that moviegoers literally fainted in the middle of theaters back in 1960. (Read More)

Inside the Home of Downton Abbey: Highclere Castle

Whether you watch the Masterpiece Classic hit on PBS and Netflix or not, chances are you’ve heard of Downton Abbey and the infamous home pictured above that is a central character of the show. (Read More)

The final Emmy nominated drama series in our outstanding home list is Showtime’s critically acclaimed Homeland.  The show is set for the most part in Maryland and Virigina, but most of the filming is actually done in Charlotte, North Carolina. Charlotte is a more affordable location for filming and offers similar surroundings to replicate the towns in Virginia and Maryland. (Read More)

The 2012 Emmy Nominations were announced last week and Mad Men, the four-time best drama series winner, took top honors with 17 nominations in total; one for each month the cult hit was off the air due to contract disputes. While we think the 17 nominations were more than well deserved, if we had it our way, they’d also be up for “Outstanding Home in a Drama Series” as well. (Read More)

In continuing our look at homes featured in the 2012 Emmy’s Outstanding Drama nominees, today we come to Breaking Bad. AMC’s Breaking Bad is quickly becoming the most talked about show online. It consistently ranks at the top of socially mentioned shows, but one part of the show is often overlooked: the White house. No not that White house. The one located in Albuquerque, New Mexico that is the home of Breaking Bad’s central character, Walter White. (Read More)

Outstanding Home in a Drama Series: House of Cards

The unexpected belle of the ball at the Emmy’s this year is the surprise hit, House of Cards, from everyone’s favorite digital movie source, Netflix. House of Cards is the first Internet-only TV show to be nominated for an Emmy and they were nominated for an astounding 9 Emmy’s including Best Actor for Kevin Spacey, Best Actress for Robin Wright and Best Drama. Not only does House of Cards have a real estate connotation in its title, but it’s got nods to our favorite topic of home throughout the show’s inaugural season. (Read More)

Game of Thrones: A Home Tour Through the ‘Red Keep’

We are certified “Thronies” here at the Coldwell Banker headquarters. So you can count us in as one of the millions of fans feverishly anticipating the season 3 premiere of HBO’s Game of Thrones. (Read More)

Sometimes, you just have to grow up and move on out of that bachelor pad you own in the penthouse of the Ritz Carlton. In season 2 of Boardwalk Empire, New Jersey’s friendliest criminal traded in panoramic ocean views on the boardwalk for a more family friendly and slower paced lifestyle. And by slower paced lifestyle, we mean less shootouts, heists, bootlegging and riots. (Read More)

The Dunphy Home from Modern Family

TV sitcoms have often taken us inside the homes of fictional families where the residence is often as much a character as the people. The homes of the Brady Bunch, the Huxtables and even The Fresh Prince of Bel Air are sets that conjure up instant images of rooms where the families solved problems, laughed and became the focal point of their lives. (Read More)