Last week, Coldwell Banker BAIN Agent Lisa Boyd received the call of her life – her son was being called up to the Major Leagues.

This past Saturday, as she has done hundreds of times before, Lisa Boyd sat in the stands with her husband and watched her son walk out to the pitcher’s mound.  The same walk she has seen through Little League, high school ball, in college at Oregon State and in the Minor Leagues.  But Saturday was different.  Lisa Boyd was watching her son walk for the first time out to a Major League mound.

For the previous two years, we have profiled star baseball players and received their first-hand accounts about the meaning of home in our Coldwell Banker Homefield Advantage series.  Now, we have the opportunity to hear what home means from mom.  For Lisa Boyd, home is where a kid can dream of becoming a baseball great.  Whether they actually reach the goal of the Major Leagues or not, it is the memories of days playing catch, pickup games in the yard or a kitchen table full of kids with dirt in their cleats that make a house a home.

As Matt Boyd took his warm-up pitches in Toronto at the Rogers Centre for his first career start with the Blue Jays on June 27, the images of a two-year old boy playing at home with the glove he had since birth flashed into Lisa’s mind.  Lisa’s husband – a ballplayer in his own right – didn’t take any chances on his newborn’s future and placed a left-handed baseball glove in Matt’s crib (and not some throw-away plastic toy glove, by the way).  The left-handed nature of the leather glove was no also accident; Matt would be a southpaw.  The playful banter from friends and family which called the insistence that young Matt become a lefty, “child abuse”, seemed to have worked in his favor, however.

With lefty glow in tow, Matt and his parents would leave a home they describe as, “full of baseball”, and travel to games around the area.  The house would soon become a living museum to the memories of days past.

When the Boyd’s didn’t bring their grill to Little League practices or games, they would host the entire team at their home for post-game celebrations.  The backyard became the stage for more fun for Matt and friends as they set up the diamond for baseball and wiffleball games.  Those games were such a big part of the Boyd’s lives, that when they decided to build a patio in their backyard years later, they immortalized home plate by encasing it in stone. When it came time to re-do the hardwood flooring, the Boyd’s were surprised to find themselves getting strangely emotional over pockmarks in the floor.  They realized certain sections of the hardwood were still damaged from when Matt and his teammates would run through the house on summer evenings – cleats still on from the game earlier that day.  The moment hit them so hard that for a second, they were unsure whether or not they wanted to still replace their floors.

As Matt threw his first pitch of his career, the amalgamation of emotions running through her mind caused her to immediately burst into tears.  It was a moment of pure bliss and exultation, followed by anxiety and nerves.  And it all started in a backyard.

If baseball is still America’s greatest export and pastime, then the Boyd’s story resonates with every American.  When I hear about the field in the backyard, memories of my childhood come back to me when a tree was first base, a sweatshirt was second, the dead spot in the grass was third and a chair stood for home plate.  It reminds me of the sacrifices my mom made to make sure I was always able to play the game I love.

Answers to the question, “what do I want to be when I grow up” become less fantastical and more realistic the older we get.  Aspiring cowboys decide to instead become doctors; would-be princesses instead pursue law.  However, Matt Boyd never let go of his childhood dream; and his parents never let him.  And home will always be a part of that. 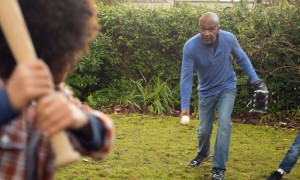 Congratulations to the two Homefield Advantage vets who are set to square off in the 2015 World Series: Jacob DeGrom and Lorenzo Cain.
Sam Shalom Oct 28, 2015