What’s For Sale In: Graduate Hospital

Graduate Hospital might be a confusing name for a neighborhood, especially since the institution it’s named for has been closed for years. But that hasn’t kept the area from being one of the hottest places to buy or sell in Philly.

Graduate Hospital, also known as Southwest Center City, was one of the first areas in Philadelphia to see a major uptick in construction, and following that, a major uptick in housing prices. Regularly named one of the hottest neighborhoods in town by Philadelphia Magazine and others, the average listing price in the area is currently more than half a million dollars. If you’ve got the budget, take a look at a few current offerings in Graduate Hospital. For less than $500,000, you can purchase a condo in Old City. The home at 133 N Bread St, is on the market for $445,000. The condo has two bedrooms, two and half bathrooms, and a large balcony overlooking a quiet courtyard. The condo community is located in Old City, the ultimate neighborhood for enjoying city lifestyle. A mecca for culture, it is home to the Arden Theater, The Constitution Center, Penn’s Landing and the Historic District, celebrity chef restaurants, boutiques and cafes.. The home at 2205 Bainbridge Street is listed by Emily Seroska, Coldwell Banker Preferred.

You have a choice of both old and new homes for under $750,000 in the neighborhood. The two-bedroom home at 929 S. 18th Street is just 10 years old and is on the market for $524,900. It features 2.5 baths, a upper level deck and lower level back yard, plus a garage that has room for at least one car plus storage.

If you’re looking for something older, the home at 2205 Bainbridge Street might be ideal. On the market for $699,900, the home is on the National Register of Historic Places. It’s easy to see why. The home has period-specific details throughout, such as original crown molding, a tiled entrance, and original cornices. The home has six bedrooms — three on the second floor and three on the third floor — and two full baths. Although it is a historic home, it has modern touches, such as a washer and dryer and central air conditioning.

The four-bedroom home at 2214 Fitzwater Street was built in the French Empire style. It has a first-floor bay window and a fireplace in the living room. It has an eat-in kitchen that opens out to a patio area outdoors. Two of the home’s bedrooms are on the second floor while the other two are on the third floor. The home is listed for $559,000.

Buying in Graduate Hospital gives you a chance to own a home in one of the more popular neighborhoods in the city. Along with owning a home, you’ll be right in the heart of the city, near plenty of restaurants, stores and parks. 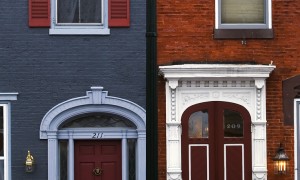 Are you looking for a home in South Philly? Check out East Passyunk Crossing, a neighborhood on the east side of Broad Street, between Tasker Street and Snyder Avenue. Take a look at what you can get...
Amy Freeman Apr 18, 2016
https://6nb29bly7g.execute-api.us-east-1.amazonaws.com/ProdStage